Some time ago, Mr Jay, a manager of a Korea company named Yamamoto, found Tuowei by international Alibaba and inquired whether we could make golf clubs prototype. Our Director of International Sales Department told him that we have been making prototype for 14 years, if 3d drawing provided, we could machined it. Due to the project was very special and needed to be confidential, Mr Joy merely sent a 2d drawing to ask us whether it could be machined. We assured that we could do after analyzed and told to Mr Jay.

Mr Jay didn't fully convince us at first, our director explained it patiently and invited him sincerely many times. He agreed to visit our company finally. On Sep.20th 2015, Mr. Jay came to Tuowei with the 3d drawing. Mr Jay observed our factory with our guiding and been satisfied with our scale and strength. Considering protected their business secrets, Mr Jay asked us to sign confidential agreement that we can't upload any picture about his prototype in next 3 years, otherwise, we must pay huge claim.

Mr. Jay was pleasured with Tuowei's professional standard and attitude for service. He believed that Tuowei could make his prototype well. Before he left, he and his friend took a photo with our director of international sales warmly. 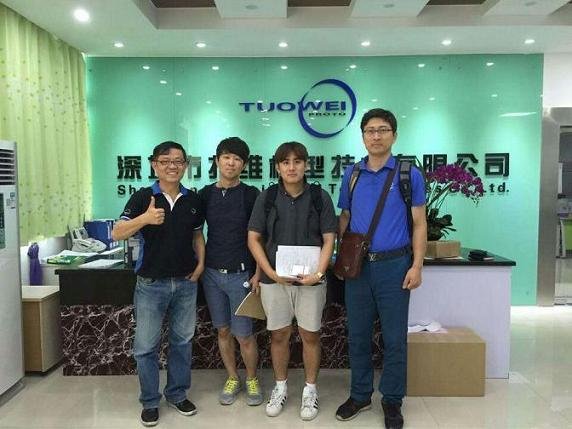